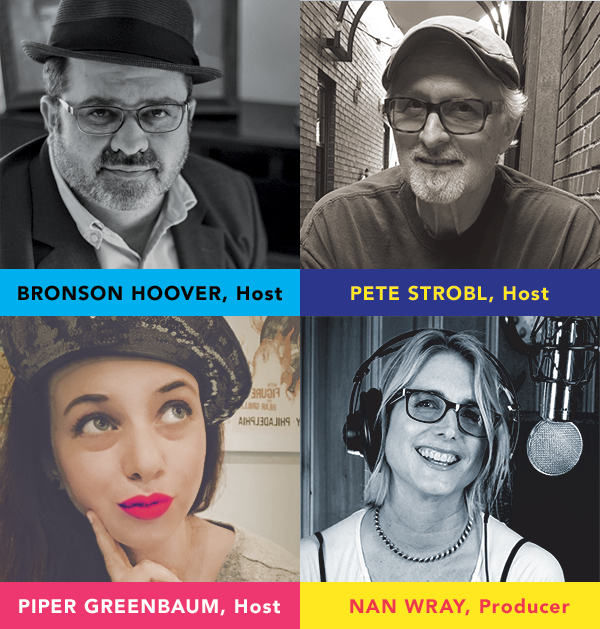 Being a host for the Baltimore Underground Radio Podcast requires a skill or interest in music and a fond connection to our city of Baltimore and the myriad number of creative people it spawns, some of which will be showcased here on our podcast.

The current host lineup for the Baltimore Underground Radio podcast is thus:

Choosing host Bronson Hoover was a no brainer. With his enthusiasm for music and creative endeavors, his amazing abilities playing keys, and his incredibly resonant and warm voice, he was destined to knock it out of the park. Icing on the cake is his finesse with all things technical related to making music and audio. Learn more about Bronson at BronsonHoover.com

Pete Strobl is a veteran musical maestro with roots in opera as well as rock. He has so many road stories it’s hard to put a number on them. Since pitching his tent in Baltimore, Pete has taken on a bevy of clientele from the local music scene. His wit is faster than his towel snapping abilities, and that’s pretty damn fast. Have a listen to any one of Pete’s interviews, and you are bound to learn something while you are laughing.

Piper Greenbaum spans two worlds, that of classical horn player and that of compelling chanteuse as the lead singer of local band Pocket Bells. Piper is the mistress of conversation and knows how to spy talent when she hears it. Her connections with the most raw and polished talent out there will bring an extra shine to the offerings we bring you.

Producer Nan Wray will occasionally interview guests for the podcast, and brings her wide-ranging skillset to task with setting up all the crazy stuff that is required to take on this endeavor. She wanted to just try it out for awhile, but then realized there was no just dipping a single toe into the pool. She would have to take a deep breath, suit up, and give her best dive into the deep end of the pool. Her background as a journalist makes this whole thing feel very natural, and having training in graphic design, illustration, photography are also key.